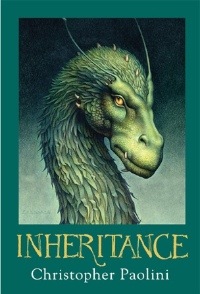 Random House has announced that the fourth and final book of Christopher Paolini's Inheritance Cycle will be published on November 8, 2011. The book will be titled Inheritance. Click here for more information on the Random House web site.

The pictures and reports coming out of Japan in the aftermath of the earthquake and tsunami are horrifying. When I read things like this:"In the town of Otsuchi, out of a population of 15,000 people, 12,000 people are missing," I want to cry. The thought of it is staggering.

A group of authors in the UK has organized an online auction to raise money to help the Japanese through the British Red Cross Japan Tsunami Appeal. You can bid on 150 donated items and services, including things like autographed books, critiques, cover designs, and web site creation. All money raised goes directly to the British Red Cross. Bidding is open now, and continues until 8pm GMT on Sunday, March 20.

Although the auction is hosted in the UK, overseas bids are accepted as long as those bids are in UK pounds. This is a great opportunity for those of us in the US to get copies of books currently only available in the UK, and help the people of Japan at the same time.

I'd like to point out a couple of items that might be of particular interest to readers of this blog:

Signed first edition hardback of SCRIVENER’S MOON by Philip Reeve
Sequel to Fever Crumb and A Web of Air. I don't think that Web of Air is even available in the U.S. yet, and it looks like Scrivener's Moon isn't even available in the UK until April, so it'll probably be a while before there's a US edition. Reeve says, "...if the buyer wishes, I can do a drawing on the title page as well." Who wouldn't wish a Philip Reeve drawing on the title page? Bidding will probably go pretty high on this one, but it's for a good cause, right?

Signed copies of FIREBRAND and BAD FAITH by Gillian Philip + two signed FIREBRAND posters + character naming
Firebrand, by Gillian Philip, is an excellent UK fantasy that I read for the Cybils. I'm actually rereading it right now so that I can review it, and I'm enjoying it just as much the second time around. This one is not generally available in the US either, and I highly recommend it. It combines fey folk with medieval witch burnings and a strong narrative voice from an interesting POV character.

There are many other excellent items and services to bid on, so head on over to Authors for Japan and check it out.

Book Review: Finnikin of the Rock

Finnikin of the Rock
by Melina Marchetta

As the son of the Captain of the King's guard, Finnikin grew up at the palace with the royal children as playmates. All that changed when the royal family of Lumatere was brutally assassinated, and the land invaded by a cousin of the King. After five days of horror, a barrier of darkness surrounded Lumatere, trapping half of the population inside the kingdom, while those who had fled were trapped without, exiles from their own land.

Finnikin is one of those exiles, and he has spent the last 10 years growing up under the protection and guidance of the former King's First Man, Sir Topher. The two travel all the lands, doing what they can to help the other exiles in the refugee camps, and trying to find a new homeland for their people. Then Finnikin and Sir Topher are summoned to the cloister of the goddess Lagrami, where they are introduced to a girl, the novice Evangeline, who claims to know that the crown prince is alive.

Accompanied by Evangeline—one might say bullied by her—Finnikin and Sir Topher begin a dangerous journey to try to find the truth, seek the crown prince, and gather together the remnants of their people.

Finnikin of the Rock is a lovely, meaty fantasy: the kind I cut my teeth on. The world building is rich, with not one, but many different cultures sharing the continent. The Lumateran culture in particular is interesting, different enough from our own to seem exotic. At times, though, the differences are off-putting and make it hard to identify with the characters. For example, the Lumaterans have a habit of insulting those they care most about. The insults are, to my ear, cutting, but they apparently are a type of bonding.

The writing seems forced in places, such as when the author is too-obviously concealing information from the reader. Of course, limiting the reader's knowledge to what the character knows and figures out is a valid and frequently used technique in these types of stories, but in some places here it's done so obviously that the reader is left feeling like Finnikin must be an idiot for not figuring things out.

Some things are not well-explained. For example, what is the cause of the dark barrier surrounding Lumatere? There's generally no magic in this world, although there are some magical-type abilities that come from the goddess. However, one wouldn't think that a goddess would create such a thing that would cause such pain to her people, and if not her, then where did the power come from to create it?

Overall, I found reading Finnikin of the Rock frustrating, because I liked a lot of it so much, but there were enough things that bothered me that I couldn't lose myself in it. Even so, I think this is a book with strong appeal to fans of high fantasy. There are enough other bloggers who loved it unreservedly that I think it deserves a place in a school or library collection, where I think many young epic fantasy readers will eat it up.

Finnikin of the Rock was a 2010 Cybils nominee in the Fantasy & Science Fiction—Teen category.

Buy Finnikin of the Rock from:
Amazon.com
Your local independent bookseller through IndieBound
Audio book from audible.com
Barnes & Noble

FTC required disclosure: Review copy provided by the publisher to enable me to write this review. The bookstore links above are affiliate links, and I earn a very small percentage of any sales made through the links. Neither of these things influenced my review.