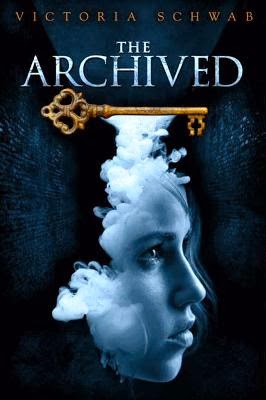 The Archived
by Victoria Schwab

It hasn't even been a year since Ben died, and Mackenzie Bishop is already forgetting what her brother looked like. Her mother copes with the grief by throwing herself with artificial cheerfulness into projects, while her father copes by retreating into himself.

Mac knows something her parents don't: that all the memories of the dead are archived as Histories, which look and act like the living person in every way. Histories usually sleep, but sometimes one awakens and tries to get out; occasionally they're even violent. Mac is a Keeper, tasked with guarding the Narrows that border the Archive and returning any of the Histories who escape. It's a role that she inherited from her grandfather, and one that she must keep absolutely secret, even from her parents. Knowing that Ben's History is in the Archive should be a comfort to Mac, but even a Keeper can't see the Histories, and Mac fears that she is losing her memories of Ben.

When Mac's family moves into the Coronado, an old hotel converted to an apartment building, Mackenzie gets a new territory in the Narrows to patrol. But something is not right — the Histories here are restless, and Mac is busier than ever trying to return them all. What's more, it appears that a murder was committed decades ago at the Coronado, a murder that someone went to a great deal of trouble to cover up. Mac is determined to find out the truth, even if it means putting her life at risk.

The Archived is a moving exploration of life, death, and grief wrapped up in an intriguing, character-driven mystery. Mac is tough — she has to be, to deal with the sometimes violent Histories — and she has the scars to prove it. But even her toughness doesn't make her immune to grief, and like everyone else she'll need to find a way to deal with it and move towards acceptance.

The story has a strong sense of place, and the various locations are lovingly described: the elegant, library-like atmosphere of the Archives, the creepy hallways of the Narrows, and the faded glory of the Coronado, which really becomes a character in its own right. The characters are likewise vividly brought to life. Besides Mac, there is a teen boy, Wes, that she meets in the Coronado. Wes hides a surprising depth and empathy behind a façade of good-natured humor. Mac's relationship with her grandfather is developed through flashbacks. Other minor characters, such as the Librarians in the Archives, are less fully-fleshed-out, but still distinctively characterized.

The setup with the Archives is intriguing and pleasingly unique. The internal logic is pretty consistent and well-developed, with one exception that bothered me. What is the purpose of keeping the Archives in the first place? There doesn't seem to be any reason for it. Loved ones can't visit the Histories, and no one seems to read the Histories except for the occasional Librarian seeking relief from boredom, and even that seems to be discouraged. It seems like an elaborate setup requiring considerable secrecy and no small amount of risk, for no purpose. If you can suspend that disbelief, then The Archived is a pretty enjoyable book.

The Archived is a 2013 Cybils Awards Nominee

Although the setup is not strictly supernatural — Histories aren't really ghosts — it should appeal strongly to fans of supernatural fiction. Teens who enjoy mysteries or character-driven fiction may also enjoy this.

Get it from:
FTC required disclosure: Reviewed from library copy. The bookstore links above are affiliate links, and I earn a very small percentage of any sales made through the links. Neither of these things influenced my review.