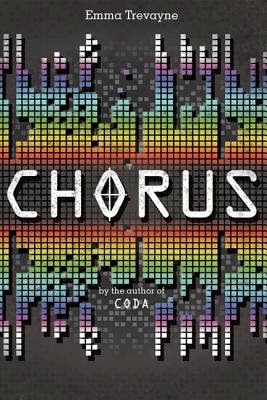 Note: Chorus is the sequel to Coda, and this review will contain spoilers for Coda. If you haven't read Coda and want to avoid spoilers, you might not want to read this review. If you're looking for an awesome YA dystopian novel with a unique premise (controlling the population with addictive music) and a diverse cast, go forth and read Coda! You won't be sorry.

Eight years have passed since Anthem led the movement to defeat the Corp and stop their use of mind-controlling music tracks on the population of the Web. During the battle, the Corp used Anthem's own younger sister and brother, Alpha and Omega, as pawns to try to stop him, and exposed them to the addictive music while they were too young for their minds to be able to handle it.

As a result, Alpha, known to her friends as Al, still has flashbacks of that day, flashbacks which incapacitate her in a seizure-like state. Determined to find a cure, Al is in Los Angeles studying neuroscience. She loves her life in L.A., and other than the flashbacks, life is good, until a message comes in from the Web that Anthem is dying. Those who lived under the Corp's mind control tend to have short lives anyway, and Anthem's years as an energy source for the Corp have shortened his life even more. Al has to leave L.A. behind to rush home to be with him. And something else is not right; Al is getting anonymous messages, and someone is stalking her. Someone who knows too much about her.

Coda was an excellent, unique, and suspenseful dystopian story. Chorus is no less gripping, but for different reasons. Chorus is much more a personal journey of addiction and love and loss. Oh, don't worry: Chorus does have its share of danger and suspense, but Al is not Anthem. She doesn't want to lead a fight; she just wants to go back to L.A. and work on her cure.

It's Al's poignant personal journey that really makes this a book you can't put down. She struggles with addiction, and every day, every minute, she resists using the tracks, for fear that if she tracks she'll damage her brain beyond her ability to find a cure. Being back in the Web exacerbates the addictive urges, and also stirs up old feelings that increase the flashbacks. Al's boyfriend from Los Angeles, Jonas, accompanies her to the Web, along with two other friends. Al's relationship with Jonas is sweet, but there's a tension there, too, from the secrets that Al's been keeping from him, including her flashbacks.

The second half of the book becomes much more externally suspenseful, as both L.A. and the Web are in danger from an unexpected threat. And when bad things do start happening, when it becomes clear that something is seriously wrong, Al must find within herself the strength to fight to save the people she loves.

Coda did a good job with diversity. Anthem, the main protagonist, was bisexual, and there were other diverse characters, including some people of color, although both of the ones I noticed were minor, if important, characters. Overall, Coda gave a sense of a diverse society where things like sexuality and race weren't issues.

Chorus seems to have fewer characters who are from groups under-represented in YA fiction. There is one same-sex couple who are minor but important characters, and a couple of characters from Coda that I'm pretty sure I remember are dark skinned — Mage and Iris — although I didn't see any physical descriptions of them in this book. If you come to Chorus after reading Coda, as I did, you'll probably read into it the same sense of a diverse society, but if you read Chorus without having read Coda, I suspect you won't come away with quite the same impression.

Dystopian book readers, fans of Coda, and anyone who likes a good character-driven story.

Note: I decided to give the Powell's affiliate program a try. I've been an Amazon affiliate since the 90s, but I've become increasingly concerned about their market share and dominance in the industry. I don't think that Amazon is a demon, but I also don't think it's good for one company to have so much power and influence. I've heard good things about Powell's (even long before it got the Colbert Bump) so it seemed like a good way to go.