Book Review: The Temple of Doubt 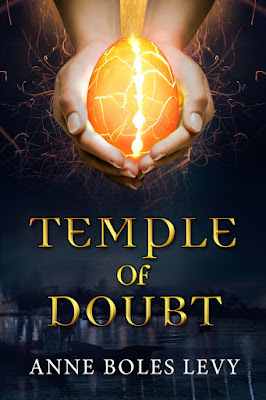 The Temple of Doubt

Fifteen-year-old Hadara and her mother Lia are technically committing a sin when they collect plants and make medicines. The priests of the Temple of Doubt use magic to cure people under the power of their god Nihil; natural remedies are heresy. But magic doesn't always work, and the priests usually look the other way and ignore the illicit medicines.

Everything changes when two powerful Azwans visit Port Sapphire. The Azwans are Nihil's highest priests, or "navigators," and they come seeking a demon that fell from the sky. Hadara and Lia are forced to guide the expedition to find the demon, because of their knowledge of the swamps and the secretive race called Gek who live there. But the swamps are dangerous and the Gek hostile to outsiders. Add in an arrogant Azwan who thinks he can take what he wants, and the expedition may not make it out of the swamps alive.

In The Temple of Doubt, Anne Boles Levy has created a beautifully detailed world, complete with three separate races and cultures, and a well-developed and unique religion. The religion is an amazing thing: Levy has obviously put a lot of work into developing it, including scriptural quotes at the beginning of each chapter. As you would expect, faith is a theme explored in this book. Although their religion is based on doubt and ambiguity, it seems like the followers of Nihil are not allowed any doubt or ambiguity in their faith, and are expected to conform and obey in all things. There are hints that there is more to this religion than it appears, and I look forward to seeing where Levy goes with it.

Hadara is a great character that teens will appreciate. She's bright and curious and bold in a culture which frowns on those characteristics, especially in a young woman. Hadara's impulsiveness gets her in trouble, especially her inability to stop herself from speaking her mind. Hadara has trouble with faith; as bright and curious as she is, she can't help asking questions, or thinking that the things she has to learn are pointless. She knows the names of a thousand plants and animals, but she can't remember the name of a single one of Nihil's wives, or their faults.

Some of the other characters are interesting as well, although not as well developed as Hadara. Surprisingly, the Azwans are two of the most interesting and well-developed characters. They could easily have been portrayed as flat, stock fantasy villains or cliched high priests, but instead they have some interesting depth and potential.

The relationship that Hadara begins to develop with one of the soldiers is disconcerting, but I think it was intended to be. Any relationship that begins with a power imbalance is bound to be uncomfortable, particularly given the destruction caused by the soldiers. Hadara holds her own, but even she feels discomfort and confusion about the situation, even as she begins to develop genuine liking for the soldier, and he seems to genuinely like her. It's interesting as a developing friendship dealing with differences in culture as well as the power imbalance, however I never really felt enough chemistry between them to make anything more than friendship credible.

The pacing is a little uneven, and although there are several exciting scenes, overall this is a book that you read slowly and ponder. I actually enjoyed it more on the second read because I picked up on more detail and development on the second time around. This is the first book in a series, and so in part it sets up the rest of the series. It'll be interesting to see how it develops.

Teens who like richly developed worlds and strong female characters. This is a book that will appeal more to teens who like their fantasy slower-paced and thoughtful.

Hadara and her people have bronze skin, in contrast to the Feroxi soldiers accompanying the Azwans, who are described as being very fair. One of the Azwans has ebony skin, and is described as handsome.

Buy The Temple of Doubt from Amazon.com

Review copy sent by the publisher to enable me to write this review. Anne Boles Levy is an online friend whom I've met several times in person. We've worked closely together on the Cybils Awards. However, I don't write biased reviews even for a friend. The bookstore links above are affiliate links, and I earn a very small percentage of any sales made through the links. None of these things influenced my review.
Posted by Unknown at 10:48 PM