Book Review: The Name of the Blade by Zoe Marriott 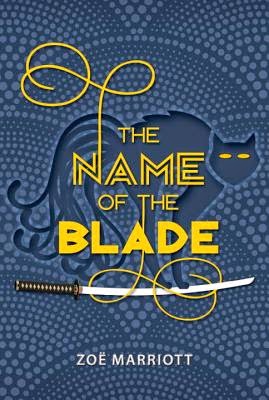 The Name of the Blade
by Zoë Marriott

Mio Yamato has a secret sword hidden in the attic. Her grandfather, Ojiichan, showed it to her when she was nine years old, He told her that the sword would be hers when she turns 16, but he made her promise not to touch it before then. Ojiichan planned to teach her about the katana, but he never got a chance, because the next day he died from a massive stroke.

All these years, Mio has avoided the sword as she promised her ojiichan, and kept it hidden away, even from the rest of her family. But when she needs a katana to complete her costume for a costume party a few days before her sixteenth birthday, she figures that she's close enough to 16 to take it. As soon as she touches the sword, though, strange things start happening. She feels an immediate connection to the sword; it's almost as if the sword is alive and speaking to her. Then a giant, catlike, many-tailed monster called the Nekomata appears. The Nekomata claims the katana, and threatens to kill everyone that Mio cares about to get it.

With a distinctive teen voice and an action-packed plot full of Japanese monsters, sword battles, Kitsune, and a super-hot 500 year old Japanese dude, The Name of the Blade is loaded with teen appeal. It should especially appeal to anyone who likes anime, Japanese folklore or culture, but there's so much Japanese influence in pop culture today that its appeal should be much broader than that.

The characters are interesting, well-rounded, and authentic teens. Mio is ethnically Japanese, but culturally she's a Londoner. Her ojiichan taught her Kendo and some Japanese folklore when he was still alive, but her father eschews his Japanese heritage, and Mio knows very little about Japan except for Kendo and anime. Mio's impulsiveness in taking the sword and her other early behavior show an immaturity that she starts to grow out of throughout the book, as she begins to take responsibility for the consequences.

Her best friend Jack (Jacqueline) is a bit of a rebel, with pink and purple streaked hair and black fingernails. Both girls get along with their families, although Mio's relationship with her father is somewhat strained. Shinobu, the 500-year-old Japanese boy, is mostly a one-note character, but his hotness more than makes up for that. He looks out for Mio, and yet I found it refreshing that he doesn't try to take the sword from her, even though they both have a claim to it, and he lets her take the lead in battle. (Although he does teach her a few things about combat).

There is also a young Kitsune (fox spirit) named Hikaru. The Kitsune are one of my favorite parts of this book. Apparently, there's a London court of Kitsune; how cool is that? Mio, Jack, and Shinobu get caught up in Kitsune politics when they visit the court to ask for assistance.

The plot is exciting but well-paced. The story alternates the big battle scenes with quieter moments and other challenges. It's quite an enjoyable read.

There are a few things that weren't explained, but since this is the first book in a trilogy, I hope that everything will be explained fully before the end.

The Name of the Blade does well on diversity. Besides Mio's Japanese heritage, Jack and her sister Rachel had a grandmother who came from Barbados, and they have brown skin. Jack is also a lesbian, which comes up a few times, but doesn't really play a role in the story, except when Jack has to tell a Kitsune who is sweet on her that he isn't her type. The girls are multifaceted personalities that are not defined by their ethnicity or sexuality.

Anyone with an interest in Japanese folklore, culture, martial arts, or anime. Anyone who likes stories where the contemporary world intersects with the fantastic.

Buy The Name of the Blade from Powell's Books

Posted by Unknown at 1:00 PM No comments: