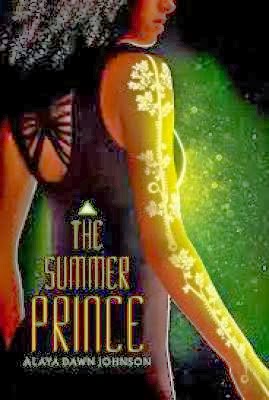 June and her best friend Gil are thrilled to wrangle an invite to the official celebration of the newly elected Summer King, Enki. But they never anticipate that Gil and Enki will fall in love, or how much Enki will affect both of their lives. Although the Summer King has no real power, Enki, who comes from the lowest level of society, is determined to use what influence he has to help his people. June and Enki begin to collaborate on a big art installation, one that they hope will both send a message to the city, and win June the Queen's Award. But none of the three can forget that at the end of the summer, Enki will die. Because the real purpose of the Summer King is sacrifice in service of the city.

The Summer Prince is a brilliant book on so many levels. To start, it's an achingly immersive story set in a future Brazil. Added to that are elements from the Sumerian myth The Epic of Gilgamesh. Going deeper, there are the themes: power and sacrifice, choices and consequences, privilege and class, order and change. Finally, there is the writing: Alaya Dawn Johnson has created a beautiful tapestry so intricately woven that the patterns aren't always obvious on the first read-through. Even on my second read I'm not sure if I saw everything.

Palmares Tres is a gem of a city where past culture and future culture merge. It's a city where people still Samba and eat Vatapá stew, where grafeteiros create masterpieces and street gangs fight with capoeira. And yet it's a city with deep class divisions, where class hierarchy is literally expressed in the city tiers: the higher classes live on the upper levels and the lowest class lives on the bottom tier, where the the stink of the algae vats is ever present. This physical expression of class hierarchy is not a new idea in science fiction, but it's well done here. That stink, known as the Catinga, becomes a powerful symbol in the story, and in fact the higher tiers call the lowest tier "The Catinga."

Palmeres Tres is a city ruled by a matriarchy: a Queen and a council of women called Aunties. Many of them have forgotten the purpose of power, and while they, in their own way, seem to love the city, often their machinations seem designed to protect their own power rather than benefit the city. Most residents of the city live 200 years or more, setting up a situation where anyone under 30 is considered a juvenile, and not to be trusted to make good decisions. So we have class conflict, gender conflict, and age conflict, and with his election as Summer King, Enki becomes the touchstone at the center of all these conflicts.

I've seen this book described as dystopian, but I don't think that it quite falls into that classification. The traditional definition of a dystopia is one that seems utopian on the surface, but is later revealed to be oppressive and deeply flawed. I think that in some ways The Summer Prince turns that around: the flaws are fairly obvious early on, but as you continue to read it becomes clear how much the citizens of Palmeros Tres love their city with a genuine love, even in spite of the flaws. However, The Summer Prince is similar enough to dystopian literature that I think it will appeal to teens who enjoy dystopian books.

It's not necessary to be familiar with The Epic of Gilgamesh or to even recognize those elements are there to enjoy the story, but if you are familiar with the Epic it's a sheer joy to discover the iconic story of Enkidu and Gilgamesh wrestling in the streets transformed into a heart-stopping Samba when Gil and Enki first meet. The Summer Prince is not really a retelling of the myth, but there are some interesting parallels.

June is an imperfect character who struggles throughout the book to make the right choices. Her dream is to be recognized as a great artist, and when that dream comes into conflict with her awakening social awareness, she doesn't always choose the right thing. She blames her mother for her father's death, and because of that she's mean to her mother. All these things make her a believable, realistic character whom the reader can identify with as she grows through her association with Enki.

The Summer Prince does a great job of representing people who are underrepresented in YA lit. All the residents of Palmeros Tres have skin of varying shades of color, and Enki himself is described as being exceptionally charismatic and with very dark skin. Sexual relationships, both same-sex and opposite-sex, are depicted in a natural, unfettered way that's totally a non-issue. In Palmeros Tres it doesn't seem to matter whom you love.

The Brazilian setting is a refreshing change from books set in European-based settings. I personally loved that the book represented a culture and people that you don't often see in American YA Fiction, but I'd be remiss if I didn't point out this review of The Summer Prince by a native Brazilian, Ana of The Book Smugglers. I'd encourage you to read the review, but in short, Ana is concerned that the Brazilian cultural elements are not always used accurately, and don't go any deeper than those elements that outsiders identify with Brazil, such as samba, Carnival, and capoeira. To Ana, it feels like a stereotype.

I've been thinking a lot about Ana's review over the last few days. Does the book stereotype Brazilians? Maybe - it's hard for me to know since I'm not Brazilian. Should a writer be able to write about a culture as an outsider to that culture? This, I think, is the crux of the controversy, and I've seen good arguments on both sides. I personally think writers stretching to write about things outside their personal experience is a good thing, because it helps to bring those ideas and cultures to other people who are not familiar with them, but the outsider has to work harder to get it right. I found an interview with Johnson where she says about her research, "I read a lot of books, particularly about the history of the African diaspora in Brazil. Also got advice from my sister, who studied in Brazil and knew many sources. And sent it to Brazilian writers for help."

I totally understand Ana's frustration and annoyance with the book. It's not quite the same thing, but I studied a martial art for 18 years, and I get really annoyed when I read a fiction book that gets the martial arts details wrong. So I get how frustrating it would be to have your culture portrayed inaccurately. But it does sound like Johnson did try get the details right, and I hope that maybe it will at least it will inspire young people to want to learn more about Brazil and read up on it, as I did after finishing the book. In balance, I think that a book like this that encourages young people to think outside their comfort zone and learn about new ideas and new cultures is a good thing. There are no easy answers, but I think it's important that we keep having these conversations as we try to get it right.

The Summer Prince is the 2013 Cybils Awards winner for the YA Speculative Fiction category.

Science fiction and dystopian readers, as well as teens who like reading about other cultures.

Get it from:
Audiobook:

FTC required disclosure: Review copy sent by the publisher for the purpose of Cybils Awards judging. The bookstore links above are affiliate links, and I earn a very small percentage of any sales made through the links. Neither of these things influenced my review.