BookExpo America was crazy this year. With the show floor only being two days instead of the usual three, it was a mad rush of activity and I felt like I was on the run constantly trying to accomplish everything.

Tuesday evening I went to Books of Wonder for a Class of 2K10 event. There were 13 YA authors presenting their debut books, released this year.

Of the thirteen, the ones that I'd most like to read are Mistwood, 13 to Life, and Shade.

At Books of Wonder, I also got to meet a couple of teen members of the Wands and Worlds community for the first time, which was a great experience!

Wednesday night I attended the Kidlit Drink Night, organized by Cheryl Klein and Betsy Bird. In addition to Cheryl and Betsy, I also talked to Abby (the) Librarian and her friend Jen. Barry Lyga was wearing an awesome shirt promoting his new book, Archvillain. The shirt read, "I'm not evil, I'm just misunderstood." I also met Elizabeth Kennedy, About.com's guide to children's books. I looked at her name tag and then did a double take when I realized who she was; I told her I was in the presence of a celebrity! I also met one of the FiveAwesomeYAFans (I'm really sorry but I don't remember your name!) and Violet Haberdasher, author of Knightly Academy, who gave me a bookmark with the great slogan, "Fencing lessons, protocol drills, and death threats. Just your average day at Knightly Academy."

I'm sure there are other people I met, so if I've forgotten you please post a comment here! I didn't stay long, because I don't deal well with noise and crowds, and it was definitely noisy and crowded! But it was fun to go for a little while and catch up with old friends and make new ones.

Most of my time Thursday was spent running between meetings with publishers to talk about the Cybils, and standing in line for autographs. I did find the time to walk the show floor, although not until Thursday afternoon, and saw some interesting things, some of which I'll be posting about in separate blog posts. The books I got that I'm most excited about are:
For the Win
Cory Doctorow
Available now
Multiplayer gaming and gold-farming sweatshops in poor countries 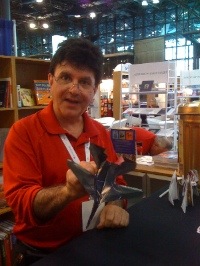 Towards the end of the day, when my feet hurt so much I could barely walk, I had two delightful serendipitous discoveries. The first was coming across origami experts Michael LaFosse and Richard Alexander promoting their line of Origami books. They had some pretty amazing examples of origami with them. You can see some of their work in the photo gallery on their web site at origamido.com. The picture shows LaFosse with an F-14 Tomcat that I watched him fold.

The second discovery was coming around a corner at the very end of the day and finding a small crowd gathered around a booth that hadn't started packing up yet. Peter Yarrow and Noel Paul Stookey (Peter and Paul of Peter, Paul & Mary) were there promoting their new children's book, The Night Before Christmas. Unfortunately, I'd apparently just missed them singing, but I did get an autographed CD for my husband.

BEA sounds great. I really want to read a lot of the books on your list. I wish we could read instead sleep at night. There's so many great books out there.

I know what you mean, Natalie! I wish I could forgo sleep, too. So many books, so little time!