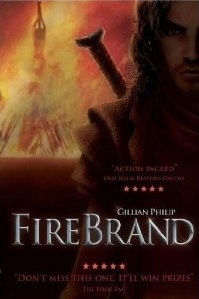 Seth is the bastard sun of the dun captain Griogar. His father barely acknowledges his existence, and most of the people in the dun revile and torment him, when they aren't ignoring him. But when his older half-brother Conal takes him under his wing, the two form a special bond. So when Conal is exiled to the full-mortal realm, of course Seth goes with him.

Seth and Conal are Sithe, and have the ability to speak mind-to-mind. Sithe also live extremely long lives, but they aren't immortal and can die on the point of a sword—or in a fire. And in the late 16th century, full mortals consider Sithe abilities to be witchcraft, and witches are burned at the stake. Can Seth and Conal survive long enough to live out the term of their exile and return to their own world?

Firebrand is an exciting story driven by a strong narrative voice that leaps off the page. Seth is an interesting character: stubborn, arrogant, and temperamental, yet redeemed by an abiding loyalty to his brother. Although initially he appears to care about no one but himself, he grows through his love and loyalty to Conal, and he shows a deep ability to care in spite of his prickly exterior. Gillian Philip did an amazing job of creating a narrator who should be unlikeable, but whom we can’t help but begin to like and care about.

The plot is exciting, with enough action to keep the pages turning. In fact, it leaps right into the action as Conal is about to be burned at the stake, then much of the book is a flashback that shows how they got to that point. There’s also plenty of political intrigue, and romance as well.

Firebrand appears to be primarily only available in the UK at this time. I was lucky enough to receive a review copy as a Cybils panelist. There are some copies available on Amazon Marketplace, but other than that, readers in the US may have difficulty finding copies. I hope that this excellent fantasy series will be available in a US edition before too long.

Firebrand was a 2010 Cybils nominee in the Fantasy & Science Fiction—Teen category.

Firebrand on Amazon.com (try the used and new link)

FTC required disclosure: Review copy provided by the publisher to enable me to write this review. Some of the bookstore links above are affiliate links, and I earn a very small percentage of any sales made through the links. Neither of these things influenced my review.

Sounds like an interesting book. Let us know if it's available here.