Book Review: The Girl of Fire and Thorns 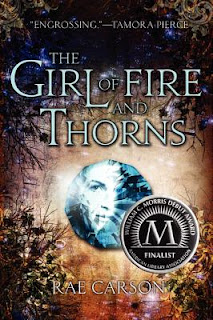 The Girl of Fire and Thorns
by Rae Carson

Once every generation, God chooses someone to bear the Godstone, a mark which indicates that person is selected to perform an act of service sometime in his or her lifetime. Lucero-Elisa de Riqueza, the younger daughter of the King of Oraville, is the current bearer of the Godstone, but she doesn't feel worthy. She's not thin, beautiful, or adept at court politics like her older sister, and she worries that when the time comes, she won't have the courage to perform her act of service.

When Elisa is wed to Alejandro de Vega, the King of neighboring Joya d'Arena, she is thrust into a world of intrigue and danger. Joya d'Arena is on the verge of war, and the Godstone makes Elisa a target. Between the people who expect her to save them, and those who want to kill her, Elisa isn't sure that she'll even survive long enough to perform her act of service, if she could even figure out what she is supposed to do.

The Girl of Fire and Thorns is a well-built fantasy with a kick-ass heroine, rich worldbuilding and themes, and enough excitement and intrigue to keep the pages turning. I first read it for the 2011 Cybils Awards, then read it again—twice—before reviewing it, and each time I got more out of it.

The worldbuilding is excellent, with a Spanish influence that made a refreshing change from the standard fantasy setting. The major religion is thoughtfully developed, with some superficial resemblance to the Catholic church, but with its own unique beliefs and rituals. In spite of the resemblance, it isn't a Christian religion, but one that fits into the world Carson developed. Religion plays an important role in the story, but not in a dogmatic way. Instead, questions of faith are explored without finding easy answers. The Godstone gives Elisa a connection to God, and she prays often, yet her prayers are not always answered; loved ones die, and Elisa battles doubts about herself and about God. When person after person claims their actions are the will of God, Elisa asks why it is that she seems to be the only one who doesn't know the will of God! Elisa even questions several times whether some bearers of the Godstone could have been selected from among the enemy, something that has never occurred to anyone else. (Not all the bearers are known).

Elisa is a terrific protagonist who ranks right up there with the best literary heroines. She may be overweight and self-doubting, but she kicks ass in every way. Some reviewers objected to the fact that Elisa loses weight as a result of the privations and trauma she experiences. They worry that the book sends the wrong message about weight, that the outward change reflects an inner change from lazy to strong, and that weight is something to be ashamed of. I didn't get that on my first read-through, however the idea troubled me and I paid close attention to it on my second and third read.

I've come to the conclusion that I disagree with this view. First, Elisa is not lazy and self-absorbed, not at the beginning, and not ever. Early in the book, King Alejandro's personal guard observes that she has steel in her, and she does. By the third chapter, she has saved her ladies during a battle, pulling one of them to safety, and killed a man to save someone else. Even as she runs into the battle she feels her stomach and breasts bouncing, but she acts without thinking and without worrying about the consequences. These are not the actions of a lazy, self-absorbed person.

Even before that, she is not a spoiled, lazy princess; she is, in essence, a prisoner. A prisoner in a gilded cage, but a prisoner nonetheless. In order to protect the bearer of the Godstone, she is not allowed to take any risks, to do anything, or even to know anything about the Godstone that she bears. Elisa is interested in war and strategy, but all she can do is read about it; she is never allowed anywhere near danger. She does clearly have an eating disorder, but given the suffocating life she has lived, is it any wonder? And an eating disorder is not gluttony; it's trauma.

Even when she loses weight, it's made clear that she isn't thin. She has lost weight, a significant amount of weight, as anyone would who lives through the experiences she does, but she is "not even close to thin." And time and time again, the people who matter most to her, including a certain romantic interest, make it clear through words and actions that her weight never mattered to them, that she was always beautiful. Here's some thoughts from Rae Carson about weight and judging people by appearances.

I think I've made it clear how much I loved this book. It was definitely one of my favorite books of the year, and I'm really looking forward to the release of The Crown of Embers in September.

The Girl of Fire and Thorns was a 2011 Cybils Awards Finalist.


Buy The Girl of Fire and Thorns from:
Amazon.com
Your local independent bookseller through IndieBound
Barnes & Noble

FTC required disclosure: Review copy provided by the publisher to enable me to write this review. The bookstore links above are affiliate links, and I earn a very small percentage of any sales made through the links. Neither of these things influenced my review.

I still haven't read this thought I've been wanting to for ages! argh. It sounds great.

LOL. Sorry to make things difficult for you, Charlotte.

Such a great review of the book. I especially appreciate your thoughts on the way weight is dealt with in the novel. I agree with you completely. This was one of my favorite reads of 2011 too! Such an amazing protagonist and the world-building is fantastic!

Hi Hannahlily. Thanks for stopping by and for your kind words about my review. I'm glad that you loved it as much as I did.

Oh wow, this one is definitely going on my wish list. It sounds like it would be right up my alley. Thanks for sharing your glowing review!!

You're welcome, Melissa! I hope it lives up to my recommendation.

The setting of this one sounds brilliant. Thanks for the review!