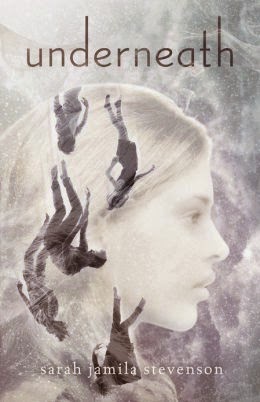 Sunny Pryce-Shah is devastated when her cousin Shiri commits suicide. How could Shiri do it? Shiri always seemed so confident, and Sunny looked up to her older cousin. Then Sunny starts to hear thoughts, and from cryptic comments in Shiri's journal, she suspects that Shiri may have had the same problem. Hearing thoughts is more of a curse than a power. It can be painful to know what people really think of you, for example, and Sunny can't control it or stop it from happening. Sunny is already dealing with so much, but she knows that she has to get the ability under some kind of control before it pulls her apart like it did her cousin.

Underneath is a contemporary YA novel with a speculative twist. The underhearing is just one of the conflicts Sunny has to deal with. In addition to grief over her cousin and dealing with her unusual problem, Sunny also has to navigate the treacherous waters of the high school social scene, and her family is dealing with the possible spousal abuse of her aunt. The relationships, including family, friend, and romantic interest, feel authentic, and I like that the book portrays how complex such relationships are. Fights happen, and sometimes no one is right or wrong and you just have to find a way to work things out. But sometimes one person's behavior is wrong, and it's not always easy to tell the difference.

The book also portrays grief in a way that seems authentic. Grief doesn't just go away because a certain amount of time has passed, and one of the difficult things for someone bereaved is when people start to feel that they should be over it. Grief also takes different forms, and different people grieve in different ways at different times.

I also like that romance isn't a major focus of the story. There are romantic interests, and even a couple of love triangles, but in the end it's not important who ends up paired with whom, and the story is really much more about friendship (and family) than romance.

From a diversity perspective, Sunny is half Pakistani. Although she is pretty much a regular American teenager, there are some bits of Pakistani culture that come from her grandparents, for example when they send over Pakistani food, or request an imam at the funeral. It's handled very naturally as a part of the normal American experience and not at all an issue.

In the end, it's character and voice that make this a compelling novel. Sunny is such an interesting character with a distinctive voice, and we feel her pain and her struggles.

The underhearing itself is never explained, and this may bother some readers. However, not understanding it is a part of the story conflict, and in real life there isn't always a neat explanation that ties things up with a bow.  I do love the word "underhearing" - it's a perfect word for what is, in essence, mental overhearing.

Teens who enjoy contemporary fiction with a paranormal twist.

Underneath is a 2013 Cybils Awards Nominee

Get it from:
FTC required disclosure: Reviewed from library copy. The author is an online friend that I've met several times at conferences. The bookstore links above are affiliate links, and I earn a very small percentage of any sales made through the links. Neither of these things influenced my review.