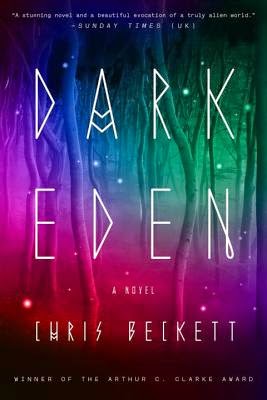 Imagine a world with no sun. A world where the only heat and light comes from geothermal energy and bioluminescent plants and animals, and everything else is dark. Imagine a community of 532 people living on this planet, all descended from two astronauts who were stranded on the planet. (And yes, there was some incest in order for 532 people to be descended from only two.)

One hundred and sixty-three years after Tommy and Angela were stranded on Eden, their descendants still live in Circle Valley, where the landing vehicle originally came down, because Angela told the family to stay close, so that they could be found when rescue arrived from Earth. Food in Circle Valley is running out, but outside of Circle Valley is the Snowy Dark, and no one has ever crossed the Snowy Dark to find out what (if anything) lies beyond. Everyone in Family fears to leave the valley, lest they be stranded when the rescue comes from Earth.

Everyone except teen ("newhair") John Redlantern. John feels suffocated in the closeness and stagnation of family, and he asks the questions that everyone else is afraid to ask. No one will listen, so John does the unthinkable, with consequences that will affect everyone in Family and cause lasting change.

Dark Eden is a compelling story and a fascinating study of a society with characteristics derived from its unique environment, as well as from its tragic origin story. As the book progresses, it starts to become clear that the origin story portrays a very dysfunctional family. How would it affect an entire society to be based on such dysfunctional origins?

The worldbuilding is amazing. Although I have trouble imagining how a planet like Eden could exist, every detail of the world is so well developed, the ecosystem consistent and logical, that it came across as fully realized and believable. All that detail is developed very naturally through the story and the characters; there are no infodumps. The society, culture, and language are all distinctive and consistent.

The characters are interesting, diverse, and well-developed. John Redlantern is a bit of an anti-hero. Although he is honestly trying to help Family, he acts also out of self-interest, restlessness, and a compulsion for change. John's sometimes-lover and co-conspirator, Tina Spiketree, is an equally interesting and complex character. In addition to John and Tina, there is a rich tapestry of well-developed characters, some of whom become point-of-view characters for a short time.

Story is an important theme running throughout Dark Eden. Obviously the origin story plays a significant role. As in many cultures, the stories from the past are retold and reenacted at important events. These stories are distorted by the lens of time, and by people who don't really understand, in some cases, what the stories mean, because they have no experience with things that could form a basis for understanding. John Redlantern is keenly aware of the power of story; he consciously makes choices that will make him a mythic character to other people, and he wonders how his descendants will tell his story in the future.

The title of the book fits on multiple levels. The planet is named Eden, and obviously Tommy and Angela are its Adam and Eve. But Earth is the Eden that they've been exiled from. The Family doesn't seem to have a religion or worship any gods, but waiting for the return to Earth has an almost religious fervor to it. Later in the book, there is also a kind of Cain and Abel vibe happening.

Dark Eden is an astonishing, compelling, and unique science-fiction story. If you like science fiction and this isn't on your TBR, it probably should be.

Note: Dark Eden is published for the adult market, but I think it has crossover appeal for teens. Besides the teen protagonists, it has a teen outlook and themes of social change that will appeal to teens. There is some fairly explicit sex, so it would be best for mature teens, but sex is not uncommon in YA today. And in spite of the explicit nature of the sex, it's some of the least sexy sex I've read in books — it's supposed to be, because it's another symptom of the stagnation of this society.