We slept a little later on Saturday, thankfully, since we weren't trying to get any autographing tickets. I was still pretty exhausted from the previous day, though.

We started the day walking the floor and standing in a few autographing lines. I tried to enter every Kindle & Sony Reader drawing I could find, because I'd really like to have one of these. It was such a beautiful, sunny day that we decided to get lunch at the hotdog stand outside on 11th Ave and eat lunch sitting on a wall in the sun. It was quite enjoyable.

After lunch, I attended a panel called Teens Sound Off. It was a panel of six teens talking about their reading and book buying preferences. All the panel members were girls - I would have liked to see a couple of guys on the panel - and I had some trouble hearing them (but then, maybe that was the ear infection) but it was a very interesting panel. I "live tweeted" the panel on Twitter, and rather than try to summarize it, I'll just include my tweets here as bullet points:

After that, I attended the Book Bloggers panel, moderated by Book Club Girl. The panel was well attended, and there seems to be a lot of interest in how publishers, authors, and boksellers can work with book bloggers. Rather than trying to tell you about it, I'm going to refer you to this post and this audio recording.
As the exhibit hall was closing. I attended a reception hosted by ReadHowYouWant at the Javits Center. ReadHowYouWant uses proprietary technology to convert publisher files to XML and produce the book in accessible formats for the disabilities market. Formats they produce include large print in a variety of sizes, braille, Daisy, and e-book. ReadHowYouWant has published two of our books so far in their accessible formats.
Saturday night I attended a party celebrating the book Geektastic: Stories from the Nerd Herd, edited by Holly Black and Cecil Castellucci and published by Little, Brown and Company. Geektastic includes contributions from some of the leading young adult authors.
The party was held in a private room at the Lucky Strike bowling alley two blocks from the Javits Center. It was a great party and I had a lot of fun. Having the party at a bowling alley was a stroke of genius. As an introvert, I'm not a big fan of the kind of party where you're supposed to walk around and talk to people. If it's people I know, I'm fine with it, but I'm very uncomfortable walking up to people I don't know and making small talk. Having something to do - bowling and pool - provided a great way to get to know people without having to figure out what to talk about.
I ended up spending most of the evening bowling with Sara Zarr, author of Story of a Girl, Sweethearts, and the forthcoming Once Was Lost, Andrew Smith from Little, Brown, and Diane Roback from PW. Sara was really nice and fun, and I'm glad to have had the chance to get to know her. Diane and I hit it off right away, and she gave me lots of good bowling tips. (I'm a terrible bowler.) With her help, I even got a strike! High five to all my bowling buddies, and it was great to meet you.
In addition to Sara Zarr, I also met Scott Westerfeld, Holly Black, and David Levithan. Barry Lyga, whom I'd met the previous evening at the Kidlit Drinks night, was also there. Rachel Wasdyke from Little, Brown was a fantastic host (although a somewhat distracted bowler, LOL). If I met anyone else, I apologize for forgetting you! 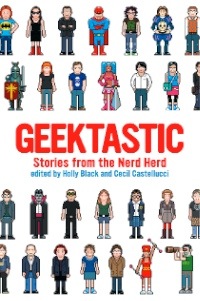 Geektastic looks like a fun book, and I can't wait to read it. Here's the publisher's description:

With illustrated interstitials from comic book artists Hope Larson and Bryan Lee O'Malley, Geektastic covers all things geeky, from Klingons and Jedi Knights to fan fiction, theater geeks, and cosplayers. Whether you're a former, current, or future geek, or if you just want to get in touch with your inner geek, Geektastic will help you get your geek on!