Sunday was the last day of BEA, and, as expected, it was somewhat quiet. I actually found that to be a good thing, though; I got more accomplished on Sunday than any other day, because the lack of crowds meant that people had more time to talk.

Throughout the weekend, Firebrand Technologies, the company behind NetGalley, was hosting blogger signings at its booth. The idea was to raise the profile of the book bloggers, and provide a venue for people to meet and interact with the bloggers. Sunday at 11am, MotherReader Pam Coughlan and I shared the booth for our signing. I was worried that no one would show up to talk to us, especially on Sunday, but I needn't have worried. We were kept busy talking to people the entire hour. It seems that a lot of people, from booksellers to authors and publishers, are interested in learning how they can work with bloggers. Pam and I talked extensively about Kidlitosphere Central and the Cybils Awards, and gave out business cards and Cybils bookmarks.

At 12:00 I spent an hour volunteering in the booth for IBPA: The Independent Book Publishers Association. After that, we stopped at a couple more booths, went to get some lunch, and then headed home.

Overall, I felt that the mood at BEA was cautiously optimistic. Yes, there was a lot of concern about the economy and the future of the book business in an increasingly digital world. I think that book people, by nature, aren't the type to dwell on misfortune, and I think that we've reached the point of moving on and looking for solutions. A lot of the brightest minds in the industry are looking at where we are and where we're headed, and I heard a lot of good ideas over the weekend.

The nature of BEA itself was changed somewhat from previous years that I've attended, and certainly more changes are in store. It was smaller, as expected, and the unrestrained galley grab of recent years was gone. There were plenty of galleys to be had, but for the most part they weren't stacked in huge stacks all along the aisles as we've come to expect. Some were given out on request to eligible people, some were put out in limited quantities for limited times, and many were given out in autographing sessions, of which there seemed to me to be more. One publisher, I think it was Simon & Schuster, sent messages on Twitter every time they put out a new, limited time galley. Personally, I see these changes as a positive thing; publishers are learning to market smarter.

The programming was also smaller, but more focused. To be honest, I don't think that I've ever attended any of the programming sessions at BEA. In past years, I've looked at the long list of sessions, and not seen much that interested me. But this time I attended several and for the most part found them to be high quality, interesting and relevant.

In short, in spite of the economy, in spite of the changes, for me this was actually one of the best BEAs that I've attended. It'll be interesting to see what happens with BEA in future years, and whether they are able to save the show by continuing to find new ways to make it relevant. I do wish that it wasn't going to be held midweek, though. I like the weekend schedule. But, I'll keep an open mind and see where things go. This one ended up better than I expected, so who knows? 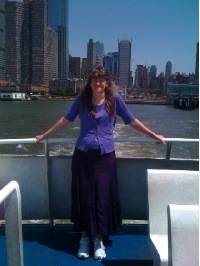 Goodbye, New York. Goodbye, book tribe. See you next year. Until then, have faith, stay strong, and look to the future.