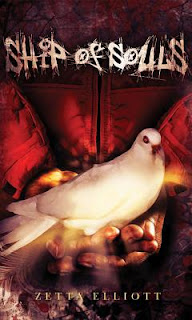 Ship of Souls
by Zetta Elliott

Dmitri, or D for short, never knew his father, so when he loses his mother to cancer, he is put into foster care. His new foster mother, Mrs. Martin, is nice enough, but she has her hands full with a crack -addicted baby and doesn't have much time for D.

One day in the park, D finds a wounded bird, and discovers it can talk. The bird tells him she is there to gather the dead from the African Burial Ground, who have been waiting for years to find peace. The bird, whose name is Nuru, has been held prisoner and prevented from accomplishing her mission, and she needs D's help.

But forces are determined to stop them, and D is in grave danger. Along with his new friends Hakeem and Nyla, D must battle dangers, from a monster made from paving stones, to hostile Revolutionary War ghosts, before he can reach the spirits who need his help.

Ship of Souls is a lovely and touching story. At its heart, it's a story of friendship, and it works best when D, Nyla and Keem are together. The friendship between these unlikely friends works, and even the slight tension between the two guys, both of whom like Nyla, makes the relationship seem genuine. Over the course of the story, Nyla and Keem become D's new family.

One of the things I found refreshing about this book is that most of the people (with the exception of the very angry and racist Revolutionary War ghosts) are really nice people. Often part of the tension in YA novels comes from the unpleasant people surrounding the protagonist, and it ends up giving a very negative view of the world. That wasn't the case here. When Mrs. Martin took D in, I was tense, expecting that she would seem like a nice old lady but turn out to be a nasty child abuser. But no, she really was a nice old lady, who just had more problems than she could deal with. When D was asked to tutor basketball jock Keem in math, I though, "Uh, oh. Keem is going to turn out to be a bully who torments him." But no. In spite of being a basketball star, Keem was really lonely because people tease him about being a Muslim, and after a little bit of initial tension, he and D hit it off almost right away. It made the book an enjoyable read.

The supernatural elements were not as well developed as I felt they could have been, and I ended up with too many unanswered questions about the dead and about Nuru, her role, her realm, and her mission. I just didn't feel that I got a very good picture of how it all fit together.

As with Elliott's first YA novel, A Wish After Midnight, there is a strong sense of place, and Elliott's love for her adopted city of New York, and in particular the Brooklyn borough, shines through. New York history also plays a role.

This would be a great book to read in a classroom setting, with its historic tie-ins and explorations of prejudice and tolerance. Elliott included several pages of discussion and writing topics at the end of the book.

FTC required disclosure: Reviewed from ARC. Review copy provided by the publisher to enable me to write this review. The bookstore links above are affiliate links, and I earn a very small percentage of any sales made through the links. Neither of these things influenced my review.
Posted by Unknown at 10:00 AM