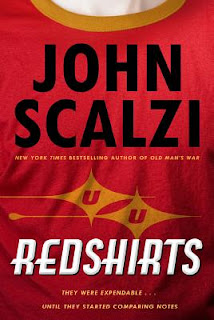 As a newly-minted Ensign on the Universal Union flagship Intrepid, Andrew Dahl expects to be gopher and coffee-fetcher for his senior co-workers. What he doesn't expect is that being the newest crew member will also make him most likely to die. Something strange is happening on the Intrepid: low-level crew members die at an alarming rate, especially on Away missions, decks six through twelve always take significant damage during space battles, and unexplained alien technology can find a cure for anything, usually in the most dramatic way possible.

With help from a crazed crew member who took to living in the cargo tunnels after his wife died, Dahl and his friends, other crew members newly assigned to the Intrepid, are determined to figure out what's going on. It's worth any risk to stop it, because if they don't, they face certain death anyway.

Redshirts is a fantastic book that manages to be simultaneously a hugely entertaining parody, a deeply philosophical existential exploration, and a rollicking good story. As you might expect from a book like this, it gets pretty meta. I'm not usually a fan of metafiction, because when I read fiction, I like to lose myself in the story, and don't want to be constantly reminded that I'm in a story. However, Scalzi manages the impossible: he incorporates the metafiction in such a way that it doesn't yank you out of the story. In fact, I think we get several layers of meta deep here, making this perhaps the Inception of metafiction.

This is a book which has something for everyone. Science fiction fans will love the parodies of  beloved SF tropes, but I don't think you have to be a science fiction fan to enjoy this. I think that even literary fiction readers will enjoy Redshirts, both for its metafiction, and because it gives them an opportunity to laugh at us science fiction geeks (perhaps not realizing how much love of the genre is imbued in Scalzi's gentle parodies).

Redshirts is published as an adult book, but I think that teens will enjoy it as well. There are a few crude slang terms for sexual acts, used in a way that you might expect in any military setting, and some implications of off-screen sex. People die in horrific ways, but that's part of the parody. Most high school age teens will not find it shocking.

FTC required disclosure: Autographed copy received from the publisher at BookExpo America to enable me to write this review. The bookstore links above are affiliate links, and I earn a very small percentage of any sales made through the links. Neither of these things influenced my review.

I wonder if this out over here yet? Of course, the title alone tells you *what* it's a parody of if you know even the tiniest amount about SF television of the last 50 years!

Hey, Michele, great to hear from you! I'm not sure if it's available over there yet or not. It was just released here in the U.S. And yes, the title alone is a trope that almost anyone should recognize, I think. :)

I checked - and it's not so I've requested the library purchase it. Hopefully come September, they will!

I really, REALLY want to read this one! :) Thanks for the teasers and the reminder to look for it. It really sounds good.

Heh. I hope you both enjoy it!

What a riot this book is! I thought the codas were self-indulgent though. Sheila did you cast this in your head as you were reading it? I know I did! You can tell Scalzi has TV experience - the action scenes are all blocked really well.

I actually enjoyed the codas, but my husband agrees with you. I'm not very good at the casting game, because I have trouble remembering the names of many of the movie actors. But I agree that the action scenes would play well on a screen!