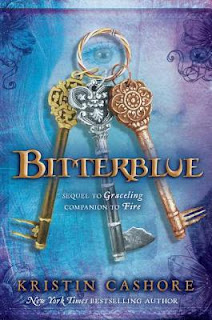 Sequel to Graceling; Companion to Fire
by Kristin Cashore

Bitterblue is that rare sequel that not only lives up to expectations set by the first book, but exceeds them by quite a bit. Each book in this series is better than the previous one, and Bitterblue is an exceptional book: heartbreaking, deep, and beautiful. Kristin Cashore has managed an amazing and unusual feat: she created a genre story whose primary theme is healing, that is as mesmerizing and page-turning as any epic good vs. evil battle.

Because of the nature of this book, I'm going to have to give some spoilers for Graceling and Fire to be able to adequately discuss Bitterblue. If you haven't read those two books, I highly recommend you read them before continuing with this review. Before you stop reading, however, I wanted to take a minute to give a content advisory. Bitterblue contains some highly disturbing elements, and is probably not a good fit for most middle-grade readers. There are references to rape and torture that happened in the past, and although they are not explicitly described, there is enough implied to make them disturbing. Some of the things that were done to characters, or that they were forced to do, are truly horrific. Some of the characters don't deal well with this past: both suicide and cutting happen during the course of the book, for example. These things are handled sensitively and responsibly, but even so, some readers will not be ready for such heavy themes.


Spoilers for Graceling and Fire Below

Bitterblue is now 18 and has taken her place as Queen of Monsea, with the help of four advisors who had served under her father and who were selected to aid her by uncle, King Ror of Lienid. Things are not well in the kingdom of Monsea. Bitterblue's father, King Leck, may be dead, but the shadow of his reign and his atrocities still looms over the kingdom. Essentially, the entire kingdom is suffering from a kind of PTSD.

Somehow, Bitterblue must find a way to heal Monsea and its people. But like everyone else in the kingdom, her memories are fuzzy from Leck's mind manipulations, and she is so busy with paperwork and administrative tasks that she doesn't have time to learn more about the kingdom. Desperate to understand her kingdom and her people, Bitterblue takes to sneaking out of the castle at night, disguised as a man. She discovers that things are even worse than she suspected. The city is falling apart and people are being killed, apparently to suppress the truth about Leck's reign.

Bitterblue is a deeply emotional book that deals with some difficult topics. Leck did things, horrible things, and it's fair to say that, even dead, he is the primary villain of this story. It's rare to see a genre book delve so deeply into the realm of the psyche and the theme of healing; topics such as cutting and suicide are more common in contemporary teen fiction. Kashore handles these themes and topics brilliantly and sensitively.

Bitterblue is a wonderful character. Much of the book is also a journey of self-discovery for her, as she moves out of the shadow of her father, finds herself, and learns how to be a queen.

All of the other characters are equally fascinating and well-developed, from Bitterblue's tormented advisors, who were hurt at least as much as anyone during Leck's reign, to the dashing sailor Sapphire and his printer friend Teddy, whom she meets in the city. My favorite new character has to be Death (pronounced Deeth), the gruff librarian who loves cats. In addition to the new characters, Katsa and Po from Graceling play a significant role, along with Giddon, Raffin, and Bann, and even Lady Fire makes an appearance.

Those who like romance in their fantasy won't be disappointed. There is at least one, and possibly a second, romantic interest for Bitterblue. Katsa and Po show that even two people who love each other deeply can fight passionately. And there are two same-sex couples: Raffin and Bann, and two women in the city. Raffin in particular struggles with what it means to be gay in a land where same sex marriage is not accepted; among other things, as a prince, his father expects him to marry and produce heirs.

I wanted to take a moment to express how much I admire Cashore. Before reading Bitterblue, I had read an article in PW about the birth of the book. Cashore struggled to write it, taking three years to write an 800 page manuscript. Her editor at Dial, Kathy Dawson, told her that she had to cut 300 pages and start from scratch. I can't imagine how discouraging this must have been for Cashore, but she rallied, and after extensive discussions with Dawson, went back to the drawing board. I don't know how it compares to the first draft, but the result is truly a masterpiece, and I'm glad Kashore put in the time and effort to do the rewrite. I admire anyone who writes a book—to me, it seems like a heroic endeavor. But to then go back and rewrite something that you've already put so much time and effort into—that's truly Herculean.

FTC required disclosure: Autographed copy received from the publisher at BookExpo America to enable me to write this review. The bookstore links above are affiliate links, and I earn a very small percentage of any sales made through the links. Neither of these things influenced my review.
Posted by Unknown at 1:51 PM

I've gone round and round on whether or not to buy this one, but probably will. Any reader who makes it through Graceling and Fire will probably be okay with it, and that won't be a huge number of readers in my library, and they will be the more mature readers. Good to be aware, though.

It's a tough call, but I don't doubt that there will be middle-grade readers who are fine with it. Probably good to have it in the collection for fans of Graceling and Fire, although in my opinion it may be too much even for some people who were fine with those two books. That may be just me, though; for me there is nothing more disturbing in a book than torture, and I can't even watch a movie which has an intense torture scene.

I was thoroughly impressed by Graceling. It's one of my favorite fantasy books. Can't believe I haven't read Bitteblue, yet! Thanks for the reminder. :)

ScifiWriterMom: thanks for stopping by. Have you read Fire? If not, I suggest that you read it before reading Bitterblue, as Bitterblue does have some spoilers for Fire.

Just decided on reading Graceling ... seems to be a must-read. Thanks for the blog!

@Librimania: I'm glad my blog was helpful. I hope you enjoy Graceling!