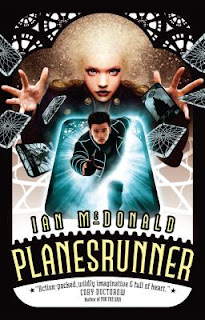 Everness, Book One
by Ian McDonald

I decided to try a new format for my reviews. I hope this is a useful format.

Plot: Everett Singh's dad, a quantum physicist, is kidnapped off the street in view of Everett by three men in a black car. Later that night, Everett gets a message from his father containing a mysterious app, with only the note "For you only, Everett." Turns out that his dad has been working on a scientific project seeking physical proof of parallel universes, and the app is a map of all the known universes, the only one of its kind in existence. Now Everett is on the run from agents of the Plenitude, an alliance of the known universes. They want the map, called the Infundibulum, and will stop at nothing to get it. But Everett has other plans, and he uses the Infundibulum to travel to an alternate London in a daring attempt to rescue his dad.


Worldbuilding: Excellent! The second half of the book takes place in E3, an alternate universe in which oil-based technology was never developed and modern technology comes out of a coal-based heritage. More advanced than our universe in some ways - carbon nanotubes are used everwhere - but less advanced in some areas, like computing. Very steampunkish feel.


Issues:
Who would like this book:
Get it from:
FTC required disclosure: Copy received from the publisher for evaluation as a Cybils awards nominee.  The bookstore links above are affiliate links, and I earn a very small percentage of any sales made through the links. Neither of these things influenced my review.
Posted by Unknown at 4:40 PM