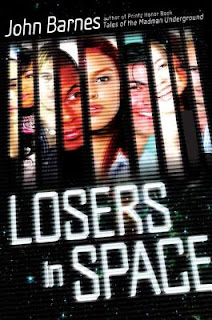 Plot: In a future where celebrity status is regulated by the government, a group of teen celebrity offspring stowaway on a ship to Mars in order to get media attention and boost their recognition scores enough to qualify for celebrity status. To the teens, it's just another party, until things go very, very wrong! Adrift in space with only their own skills to draw on and a sociopath on board, the teens must learn to rely on themselves and each other as they try to survive and find a way to get home.

Worldbuilding: A well fleshed-out dystopian future. Barnes developed the social aspects as thoroughly as the science, and did a great job of portraying the customs and language.

Issues:
Who would like this book:
Get it from:
FTC required disclosure: Reviewed from library copy. The bookstore links above are affiliate links, and I earn a very small percentage of any sales made through the links. Neither of these things influenced my review.
Posted by Unknown at 1:24 PM

I absolutely loved this one, but I'll agree that it's somewhat tough to get into. I partially kept going because I'd liked other books by Barnes.

But it is so awesomely rewarding.

Agreed! "Awesomely rewarding" is such a perfect way to put it.

A lot about this interests me--including the title. But that first 100 pages issue...