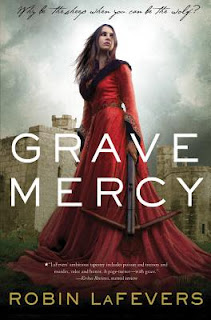 Plot: Ismae Rienne still bears the scars of the poison her mother took in an attempt to abort her. Her survival from that, and the scars from the incident, prove that she was sired by the god of Death. At seventeen, when her abusive father sells her to an equally abusive husband, she is spirited away by secret followers of the old gods to the convent of St. Mortain, the god of Death. The convent takes her in, gives her a home, and trains her in all the skills necessary to serve St. Mortain, from poison and weapons training, to history and "feminine artistry."

The convent is loyal to Brittany, and to its young Duchess Anne, who is fighting to retain Brittany's independence from France. When word reaches the convent that there may be a traitor in Anne's court, Ismae is sent on a mission to Anne's court, disguised as the mistress to the nobleman Gavriel Duval. Her instructions are to search for information on the traitor, assassinate anyone marqued for death by St. Mortain (or that she is ordered to assassinate by the convent), and to watch Duval, who may be the traitor. But when her instructions come into conflict with her heart. Ismae must make some difficult decisions.

Notable Characters:
Worldbuilding: Because Grave Mercy is set in a historical time and place, in many ways the worldbuilding is more about creating a sense of place and bringing to life 15th Century Brittany. This LaFevers does excellently.

Issues:
Who would like this book:
Get it from:
FTC required disclosure: Review copy sent by the publisher for Cybils Awards judging. The bookstore links above are affiliate links, and I earn a very small percentage of any sales made through the links. Neither of these things influenced my review.
Posted by Unknown at 3:33 PM