Book Review: The Color of Rain 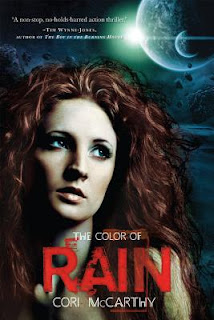 The Color of Rain
by Cori McCarthy

Plot: Rain White lives in Earth City, where she ekes out a living trying to take care of her little brother, Walker. That is, until Walker becomes one of the Touched, people who have a degenerative brain disease. If the authorities find out about Walker, they'll take him away. No one knows what happens to the Touched after the authorities take them, and Walker is the only family that Rain has left.

Determined to protect her brother, Rain makes a deal with an offworlder, Johnny, who promises Rain and Walker passage through space to the Edge, where the bioengineered Mecs may be able to cure Walker. In exchange for passage, Rain agrees to be Johnny's girl. But Rain has no idea what she's getting into. Onboard ship, Rain learns that Johnny has many girls, and runs a prostitution ring. But Johnny has even darker secrets than that, and soon Rain must make a choice whether to get involved for the greater good, or to continue to do whatever it takes to ensure that she and Walker survive and make it to the Edge.


Notable Characters:
Worldbuilding: Earth City is a gritty, futuristic city where everyone lives a soulless life going from one factory shift to the next, and those who don't even have that live on the ragged edge. Most of the book takes place on board Johnny's ship, which is well-developed and has its own, er, twisted culture. The rest of the universe is touched on though small scenes and interactions with other people. The worldbuilding is effective, although not extensive.

Issues:
Who would like this book:
Get it from:
FTC required disclosure: Review copy given by the publisher at BookExpo America to facilitate writing a review. The bookstore links above are affiliate links, and I earn a very small percentage of any sales made through the links. Neither of these things influenced my review.
Posted by Unknown at 12:30 PM