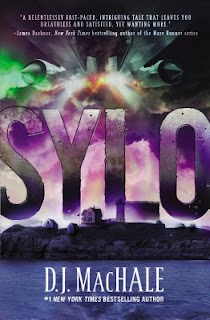 Synopsis: When tailback Marty Wiggins suddenly drops dead in the middle of a high school football game, it's the beginning of a strange series of events that will disrupt quiet Pemberwick Island just at the end of the tourist season. The backup tailback, freshman Tucker Pierce, and his best friend Quinn are among the only witnesses to a strange shadow that explodes off the coast of the island. Then the island is invaded by a mysterious U.S. military unit known only as SYLO, who take control of the island and quarantine it from the mainland, to stop the spread of the mysterious virus.

But Tucker and Quinn, whose parents are doctors at the island's hospital, suspect that SYLO isn't telling the whole story. Before long the two friends, along with another island teen, Tori Sleeper, are caught up in events. As the situation on the island spirals from bad to worse, the three teens find themselves on the run, carriers of information that they can't share with anyone. But what can three teens hope to do against the might of an occupying military force?

Who would like this book:
Get it from:
FTC required disclosure: Review copy given by the publisher at BookExpo America. The bookstore links above are affiliate links, and I earn a very small percentage of any sales made through the links. Neither of these things influenced my review.
Posted by Unknown at 1:00 PM